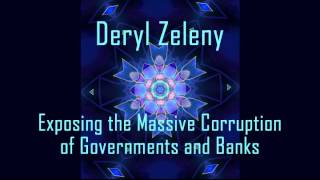 In this new interview [MP3 file] with Captain Deryl Zeleny, Royal Canadian Air Force (retired), we cover the latest series of events in Deryl’s campaign to reveal to the world the corrupt nature of the Canadian banking/court/police mortgage foreclosure machine.

This interview first summarizes Deryl’s story to date and picks up the story from Tuesday 30th May 2013 when a removals team, including a representative a from a company purported to be the manager of properties foreclosed on by the Bank of Canada.

Deryl had returned to his property to protect it and his possessions, as he had discovered that deliberate theft of heavy equipment by agents acting for the bank as is his right in Canada had occurred. When he asked the property managers to leave on the basis they were trespassing on his property for unlawful purposes, the police were called and arrested Deryl.

That began a 3 night, four day battle of nerves as the Crown Solicitor tried to impose unlawful sanctions to stifle Deryl’s ability to communicate this incident to his wide audience which includes the military. The initial charge of trespass which should have resulted in a ticket and a brief visit to the police station, magically became a criminal charge of forcible entry at the request of the Bank of Canada.

In order to be bailed out the Crown stipulated that a surety (guarantor) had agree to supervise Deryl and that he not be allowed to publish, use the internet, telephone or communicate with his “followers”. (You mean the one people?) He spent three nights in three different facilities as they feared “crowds” might gather. Deryl rejected all attempts to gag his communications as part of the bail terms and when his surety pointed out to the last solicitor that they were attempting to politically censor Deryl, the Crown capitulated and removed the communications bans. He was released from Quinte Detention Centre, Ontario on Friday 3rd May 2013.


The story is not yet over, as the charge that the bank had forced on Deryl, may well backfire on them in court.

Once again we thank Deryl for his incredible commitment to bringing an end to corruption. We will be organising email flash mobs in support of Deryl and will continue to follow his journey. Please keep a look out for them.

Are you fed up with the unchecked fraud, greed and seemingly-unlimited power of the major banks?
You are not alone! Citizens from across the globe are infuriated by the corrupt banking system.
Join the millions of banking customers around the world who are peacefully withdrawing their money from major banks in a coordinated, global effort.
If you do your banking with BANK OF AMERICA, CHASE, WACHOVIA, WELLS FARGO, CITIBANK, US BANK, SUNTRUST BANK, NATIONAL CITY BANK, MORGAN STANLEY, UNION BANK, UBS, MORGAN STANLEY, GOLDMAN SACHS, BRANCH BANKING & TRUST,  REGIONS BANK, COMERICA, PNC BANKS or any of these other major banks -- pull your money out and put it with a local, regional bank or a community credit union instead.

Your home, your job, or your business is now probably gone or on the edge due to the inordinate power and control that the global banks have over all of us today.

-Congressman Spencer Bachus (AL)
December 8, 2010 in The Birmingham News
Is this guy kidding us! Unfortunately he is not. This comment proves that our government is at the beck-and-call of the Big Banks!


NOW is the time for all sovereign people to strip the power from the BANKS.
There is no need to protest in the streets or take time off from work to make a difference. All you need to do is go to your local bank branch today and politely say to the teller: "I'd like to close my account." That's it! It's simple, painless, and powerful. In this way, the People can send a very powerful yet peaceful message to the Elites that WE are in charge.
Nonviolence is the rock on which the whole structure of noncooperation is built.
- Mahatma Gandhi
World-Famous soccer star and actor Eric Cantona (Manchester United / 'Elizabeth') got it absolutely right when he said the following:


What does it mean to demonstrate in these days? Nothing. Demonstrations in the streets are for the deluded. They lead to unnecessary violence, and place energies out in universe that accomplish nothing except to further the aims of the oppressors.

Humans need to remain centered in the Now -- as Humans -- and to take effective action from a Human perspective. We engage and remove the oppressive system not by trying to bludgeon it down, but by deflating it.


It is time for a massive, non-violent public response to the banking cabal that has collapsed our economies and thrown us out of our homes and into the unemployment lines

Thoughtful, peaceful resistance is what our movement is all about.

Stop Bank! USA in the News

Our movement got coverage in Common Dreams in an article by Dave Lindorff:

"But even here in the US, the idea of sticking it to the big banks has begun to resonate, with a website called Stopbank USA calling for a day of action by Americans on December 7."

Thanks for helping spread the word, Dave!

Once debtors got inside, they were fooled into believing they were in a courtroom with a judge, but the whole thing was a fake, according to a lawsuit filed by the Pennsylvania attorney general.

The system is OUT OF CONTROL!